After years of artificially low interest rates, the world is finally waking up to the very real possibility that interest rates are beginning to return to their natural levels (higher). It is difficult to overstate the significance of this in terms of its investment implications and potential effects on the global economy.

In the wake of the financial crisis of 2008-2009, the world’s central banks, led by the Federal Reserve Bank of the United States (The Fed), embarked on what was then considered a highly experimental monetary policy which quickly became known as “quantitative easing” (QE). At its core, QE is nothing more than creating money out of thin air, usually on a computer at the central bank, and using those funds to purchase securities in the open market. This is done at essentially zero marginal cost to the bank (it’s just ones and zeros on a computer after all), but it has the immediate effect of creating significant demand for the securities being purchased by the central bank and being added to their newly-expanded balance sheet.

Whatever securities they choose to buy are getting a bid and will trade at a higher price than would be the case if they were not in that market. This is simple supply and demand. When they buy government bonds and mortgages, as was the case with The Fed, it raises the price of those bonds and by definition lowers interest rates, as the borrowers or issuers of the bonds reap the rewards of the generosity of the non-natural buyer. The European Central Bank followed suit and expanded their buying program to include corporate bonds, which has had the perverse effect of allowing European corporations with non-investment grade (junk) ratings to issue debt at lower interest rates than the U.S. Government. Japan and Switzerland decided to include equities in their programs, and consequently are now some of the biggest shareholders of both the Japanese stock market and American mega-cap corporations, such as Apple and Microsoft, respectively.

As an aside, how do you think most people would react if our own central bank started buying shares of these companies directly? But I digress….

Here is another interesting facet to these shenanigans. Guess what The Fed is required to do with the interest it earns on all of these bonds it buys? Remit it back to the U.S. Treasury! That’s right. The U.S. Government has been able to partially finance itself on an interest-free basis through the QE program at the Fed because whatever interest it pays on the debt it issues and ends up on The Fed’s balance sheet comes right back to the U.S. Treasury. Pretty slick, huh?

Prior to this worldwide experiment which saw the major central bank balance sheets (US, Europe, Japan and China) swell from about $7 trillion to $20 trillion, most observers believed that this was banana-republic type of behavior. After all, you can’t just print money and monetize the debt in such a brazen fashion forever before everyone realizes that the value of the currency equals its marginal cost of production (zero). This is what happened in Weimar Germany after World War I and Zimbabwe more recently.

At the turn of the century The Fed owned about $500 billion of bonds. When the crisis hit in 2008, it was around $900 billion. After three rounds of QE, it has swollen to nearly $4.5 trillion, and it still sits pretty close to that number today at $4.4T. And they were not alone – they were joined by Europe, Japan, England, Switzerland, Canada, and China, among others. Few people believe that the central bank should hold so many bonds. After all, we got along fairly well for a long time before it grew by a factor of roughly 5x in the span of six years. So now it has come time to try and unwind all of this. The only way to do this is to reverse the whole process and allow the bonds to mature and not make the proceeds available to purchase more debt. This “rolling-off” has the exact opposite effect of QE, by decreasing demand for bonds, thereby increasing interest rates, all else being equal.

Prior to Janet Yellen’s retirement as Chair of the Federal Reserve, she was careful to lay out a plan for this unwinding of the balance sheet, and announced it to the world. The process started in Q4 2017, whereby they started allowing $10 billion per month ($6 billion of Treasuries and $4 billion of mortgage-backed securities) to mature and not be reinvested into new debt. The plan is to allow that number increase by $10 billion per quarter, keeping the proportion constant, until 4Q 2018, by which time they will be allowing $30 billion of Treasuries and $20 billion of mortgages, or $50 billion in total per month to disappear back into the monetary ether from which it came.

$600 billion per year is a lot of money. That is $600 billion per year that the issuers of these bonds are going to need to find new buyers for, since the central banks are in the process of stepping back. Of course these facts are well known amongst institutional investors, but it seems that the reality is finally beginning to set in. Look at these charts of the yield on a benchmark 10-year treasury bond: 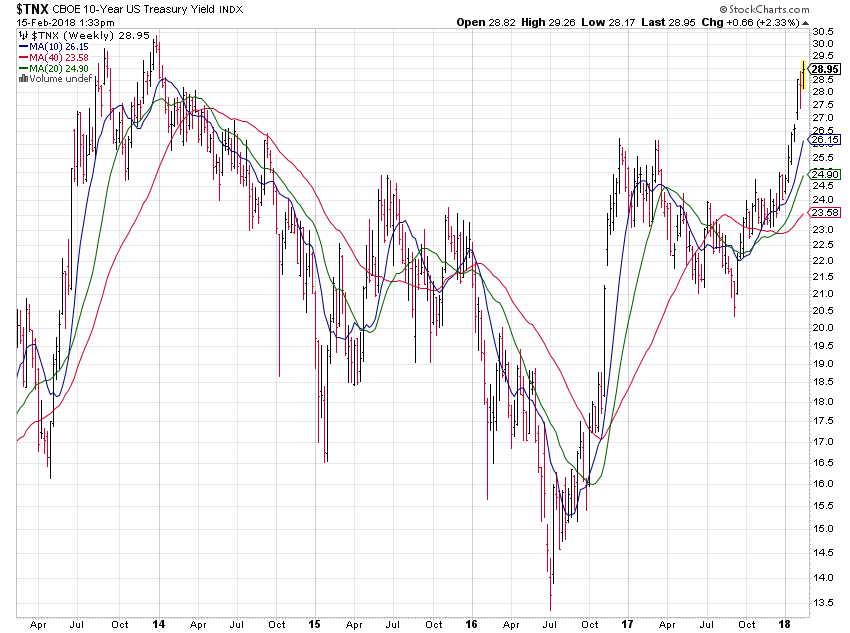 And a 20-year perspective: 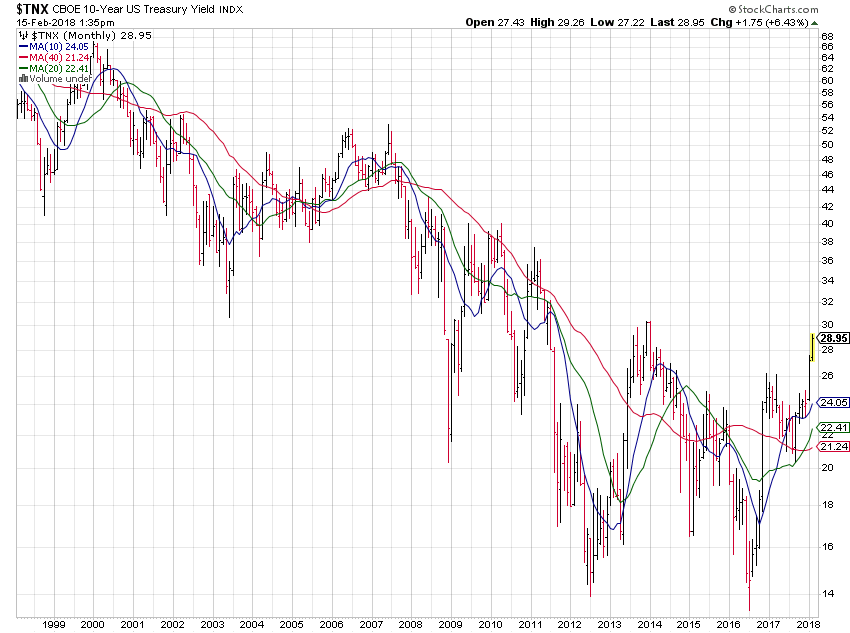 It has been over four years since this bond traded at a yield in excess of 3%, and has been seven years since it saw 3.05%. Just a little bit higher from where we are today and we will start seeing headlines proclaiming these facts. I think that will really start to get people’s attention.

Any change which has the effect of either increasing available supply of debt or diminishing demand will cause interest rates to move higher. Consider:

And this is during a time when the economy is supposedly going gangbusters! What do we think is going to happen to the deficit when we go into a recession? The longest economic expansion ever recorded was 10 years, ending in the wake of the dot com bubble in March 2001. The current expansion will reach its 10th birthday in June of next year. Do we really want to bet the farm that things that have never happened before are likely to happen? That is what the budget numbers, which don’t even come close to balancing over the next decade, are assuming.

So to sum up the interest rate picture, it appears that the path of least resistance is higher, and potentially much higher, on account of both increased supply of bonds (budget deficits, and refinancing needs of both government and corporations over the next several years) and diminishing demand (central banks stepping back, other buyers becoming more concerned about inflation and demanding higher rates to compensate them for the increased risk of holding longer-term bonds).

What are the investment implications? Some seem pretty obvious.

It is not a foregone conclusion that stocks will suffer immediately in this environment. It is important to remember that there is a lot of money sloshing around in the world looking for an investment home. If bonds look ugly, stocks could benefit by comparison, at least for a while. And at least for now, both Japan and Europe are still expanding their central bank’s balance sheets. As I see it, the stock market is currently engaged in a tug-of-war, with both sides of the battle armed with significant forces at their disposal.

On the one hand, the economy is growing at a healthy pace right now. That fact, combined with the boost in corporate profits anticipated from the recently-passed corporate tax cuts, have analysts quite optimistic about the prospects for corporate earnings growth over the next several years. According to the excellent work of Howard Silverblatt at Standard & Poors, GAAP earnings for the S&P 500 companies for calendar year 2017 should come in around $110 per share. However, earnings for the current year are estimated at over $145 per share, representing growth of over 30% year-over-year. In reality, forward-looking estimates tend to be overly optimistic, sometimes blatantly so, but let’s suppose that we get 20% earnings growth, which is not at all unrealistic given a strong economy and the benefit of a reduced tax burden. That would put 2018 GAAP earnings for the S&P 500 at around $132 per share.

If investors are still willing to pay 25x earnings to own the S&P, as they are today, then that works out to a value on the S&P 500 Index of (132*25)=3300. The index is trading around 2720 as I write this. On the other hand, if we get some compression on that multiple, which would be expected in a high-rate environment, the picture changes significantly. In a “normal” environment, most of the time, investors have paid between 14 and 20 times earnings to own “the market.” This makes sense when you consider that 1/20 equals 5 percent and 1/14 is about 7 percent – in other words, investors have historically demanded an earnings yield of 5-7 percent to compensate them for the risks of owning stocks instead of, say, guaranteed instruments like Treasuries and insured bank deposits. Today they are only demanding a 4 percent earnings yield, but I believe that will go away as interest rates continue to rise (the earnings yield will rise as well).

If on the other hand, people start to doubt the earnings-growth story, maybe on account of higher interest rates and the effect that will have on consumer demand, or the cost of refinancing corporate debt at higher rates, then all bets are off. You could easily end up a year or two from now where earnings are coming in at or below where they are today, and investors are paying a much lower multiple for those earnings. For example, (100*14)=1400, or a loss of nearly 50 percent from here.

I am not making this prediction at this point, just pointing out the possibility. If we did suffer a loss of 50% on the S&P 500, it would mark the third such episode since the turn of the century, so it is hardly without precedent. Given that the global debt bubble has swelled to $233 trillion as of the end of 2017, you have to believe that higher interest rates are going to hurt – governments, corporations, individuals with car loans, student loans and credit cards – a lot. It’s simple math.

What could change the trajectory of interest rates? Here are three possibilities:

US government bonds and treasury bills are guaranteed by the US government and, if held to maturity, offer a fixed rate of return and guaranteed principal value. US government bonds are issued and guaranteed as to the timely payment of principal and interest by the federal government. There is an inverse relationship between interest rate movements and bond prices. Generally, when interest rates rise, bond prices fall and when interest rates fall, bond prices rise. The S&P 500 is an unmanaged index of 500 widely held stocks. It is not possible to invest directly in an index. Views expressed are not necessarily those of Raymond James & Associates and are subject to change without notice. Information contained herein was received from sources believed to be reliable, but accuracy is not guaranteed. Information provided is general in nature, and is not a complete statement of all information necessary for making an investment decision, and is not a recommendation or a solicitation to buy or sell any security. Past performance is not indicative of future results. There is no assurance these trends will continue or that forecasts mentioned will occur. Investing always involves risk and you may incur a profit or loss. No investment strategy can guarantee success. Raymond James Financial Services is not affiliated with Janet Yellen, Howard Silverblatt or Standard & Poors. Not approved for rollover solicitations.